5 Storytelling Flaws in The Great Gatsby

by BlueCat | May 13, 2013 | Articles, The BlueCat Screenplay Competition Blog | 7 comments 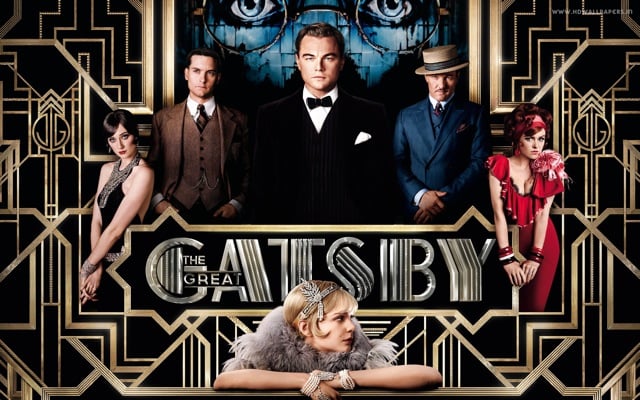 I haven’t read F. Scott Fitzgerald’s The Great Gatsby since I was in the ninth grade, twenty years ago now, but I do remember it being a quick read; at fifty thousand words, an average reader can go cover to cover in little more than four hours. Watching the most recent film adaptation takes about half that time. Unfortunately, it feels like a ten-hour ordeal. Or did to me, anyway.

It is flashy and extravagant to a fault; distractingly, though intentionally, anachronistic; and lacks, for me, even a hint of humanity until the very end, at which point it’s simply too late.

Here are what I view as the film’s biggest flaws:

1. Its Use of Narration as a Crutch

I understand the urge to use voiceover narration to tell this story. It’s an adaptation of a famous novel told in first person, and the prose is, of course, fantastic. One would think that if any movie could use voiceover narration, this would be that movie. But I grew tired of it in a hurry. Almost every major story point is explained to us rather than dramatized, and those few that are dramatized are ruined by being redundantly and simultaneously explained as well. The film is full of crane shots, quick cuts, and CGI, all set to hip-hop music, but none of these things are used to further the story. They are used merely as eye candy, or ear candy, something for you to be entertained by while the story is explained to you in boring narration. In the end, it seems like such a waste.

2. Its Self-Indulgent Focus on Being a Spectacle

Movies should be about the stories they’re telling, and at its heart, The Great Gatsby is a simple story about a complex man in a complex relationship. Unfortunately, this is lost in a muddle of party sequences that go on for far too long, ridiculous driving scenes that feel like car chases despite being mere jaunts to lunch, and strange conversations at speakeasies that do little to further the story or reveal character. One could cut an hour from this film and have a tighter, more focused story which was richer in emotion, because that emotion would not have been buried under so much glitter.

3. Its Complete Lack of Verisimilitude

The Great Gatsby is full of odd moments that do not belong in a movie set in the summer of 1922. The vehicles all sound and drive liked souped-up muscle cars; the music, even the music characters listen and dance to, is never music of the period; the party sequences do not feel like parties so much as Cirque de Soleil performances; even the camerawork constantly reminds you that this is a movie of today. Authenticity is sacrificed at every turn for bright colors and hip music, and when authenticity is sacrificed so is the viewer’s belief in what he or she is watching. I was constantly aware of the fact that I was being “entertained,” and that awareness resulted in my not being entertained at all. I never fell out of reality and into the world of the film, which, I think, is what going to the movies is all about.

When a film spends so much time on spectacle rather than story, it is a mistake to repeat story points, but we are given Gatsby’s backstory twice. If Gatsby’s backstory was kept off screen until the end (when it is discussed for the second time), there would at least have been a sense of mystery about the character throughout the film, and with a good actor that mystery could have provided depth. We would know there is more here than we see. The ending could, then, have provided a powerful reveal, increasing the emotional impact of what we have already seen and shedding new light on all that has come before. Instead we merely have a rehash of what we have already learned. This weakens the middle section, which is slowed down by flashbacks, and it weakens the end, which lacks any revelation where a revelation could have been provided.

Though Gatsby is filled with fine or better performances, one never feels an emotional connection to anything that is happening. I suppose Baz Luhrmann’s adaptation of Gatsby could work a metaphor for the carelessness and shallowness Fitzgerald was criticizing in his novel of the same name—for the film is careless and shallow—but I somehow doubt that was the intention.

If Luhrmann had simply allowed the story to unfold onscreen without constantly drawing attention to himself, he would have ended up with a powerful little fable that said so much more than this adaptation does—but which said it quietly.

Instead, the main character of The Great Gatsby is Baz Luhrmann, and though he screams at the top of his lungs, demanding attention, when you finally give it, you find he has nothing to say.

Ryan David Jahn is the author of four novels. His first, Good Neighbors, won the Crime Writers’ Association John Creasey Dagger, and his third, The Dispatcher, was recently optioned for film by Anonymous Content. His work has been translated into twelve languages. You can find out more about the author and his books at http://ryandavidjahn.com.